In the last week:

See more mentions, citations and articles of interest on bbg.gov.

“The past two years were overwhelmed by violent and non-violent social conflicts that are shaping the present and the future of several societies in North Africa and the Middle East. In the midst of turmoil, I have been working as a Radio Sawa reporter to make the voices and aspirations of those who were asking for change heard as well as the reactions of politicians and military leaders trying to sustain the status quo. My reporting assignments took me to Juba earlier in 2011 to document the split of the South Sudan from Sudan and to Libya at the height of armed conflict between the rebels and Qaddafi forces. During the decisive eighteen-day Egyptian Revolution in January and February of 2011, I camped out in Tahrir Square in Cairo.

I moved across the front lines among protesters and police in Cairo, and along the dangerous roads of Benghazi, Ras Lanuf and Misrata in Libya.  Through my reporting I was able to capture the dynamics of NATO air attacks, the fight between Qaddafi’s forces and the rebels and various manifestations of impending humanitarian devastation. I was one of only four foreign correspondents who managed to enter the city of Misrata, against all odds.  Our United Nations humanitarian boat fell under heavy bombing by Qaddafi’s forces.

I missed death twice. The first time by escaping from a car I was riding in seconds before it was hit by a rocket. The second brush with death was in May when Qaddafi’s forces targeted the IOM (International Organization for Migration) boat I was on trying to get back to Benghazi.

During the three weeks I spent in Misrata, I stood directly in front of the perpetrators of violence on both sides.  One of the most chilling moments from my time in Libya was hearing the last words of American photojournalist Chris Hondros, minutes before his death. They still ring in my ears. “I was expecting to die covering a war, not a revolution!” he said.  The pain he must have suffered still haunts my memory of him.

I will always look forward to covering frontlines despite the dangers inherent in such an assignment. “War is a work of terrible power and redemptive clarity whose truths have never been more necessary,” as war reporter Chris Hedges said. As journalists, we need to be where people need their story told.  We can’t stop wars or conflicts and we can’t save lives, but we can give a voice to the voiceless. We can be a witness to shine a light on the darkest corner of human nature.

I will keep telling stories of people hoping you would listen.  If I do not come back, I am sure some journalist on the frontline will bring you my story.”

Mohamed Moawad accepting an award at the New York Festivals

Mohamed Moawad has been a radio broadcaster for Radio Sawa since August 2011. He earned three awards for Radio Sawa at the 2012 New York Festivals for his coverage of the Egyptian Revolution and the events in Libya.  He interviewed local peoples in Tahrir Square who called for change and those on the front lines in Misrata fighting pro-Qaddafi troops. 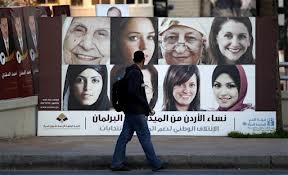 Click on the links above to read about Al Hurra and Radio Sawa’s coverage of the elections in Jordan.

For more information (and an English-language summary) visit BBG.gov.

Barack Obama was sworn in for a second term as President of the United States Jan. 21 and Broadcasting Board of Governors journalists were on hand to cover the day-long celebration for their audiences around the world.

For more information and to view other photographs from the day, visit BBG.gov.